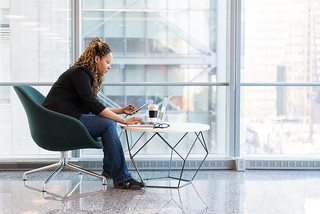 Being the only woman in the company taught me that diversity is often an afterthought for startups when it should be the first priority. Photo: Women in Tech

When I was hired for my first internship, I was ecstatic. I was in my second semester of college and I was shocked that two companies decided to further my application down the hiring process. One was faster: it was a startup. There was no process: I wasn’t hired on the spot, but I was just passed along until I ended up two weeks later in front of the coworking space where the startup was located. I tried my best to learn quickly; I picked up new tasks everyday and shadowed other interns. But on the days when most of the team wasn’t there, I felt increasingly lonelier. As I sat by myself on one of the long tables, I noticed that not only was I the only woman sitting at the table, but also the only woman in the entire room besides the receptionist at the front. At first, I didn’t mind that I was the only woman in my company. But as days grew into weeks, I felt increasingly isolated. There was no blatant discrimination; there was no pay gap because the other interns weren’t paid either.

On one occasion, as a hiring representative, I attended a job fair along with the CEO. I soon realized not only was I much younger than both the candidates and the company representatives, but also I was also the only woman on the company side. Here I was, a nineteen year old, explaining and trying to hire graduate students. I felt like an impostor, trying to act and dress like a thirty year old when I wasn’t even twenty. I even skipped class that day to avoid suspicion that I was still a student and continue with my facade as a HR manager. After the event, I stayed behind to clean up and push the tables back into place. I nearly cried from a mixture of exhaustion and stress. I had invested so much into buying a new wardrobe, new shoes, and crafting a new personality because I felt like I had to represent all women in the startup workplace. I had internalized such pressures because I felt like others wouldn’t take me seriously unless I dressed in a certain way or talked in a certain way.

I began to dread going to work. I felt like a four year old child trying on a mother’s high heels, except I had to keep on the shoes, both physically and mentally, for hours on end. Work productivity dropped. I wished there was another woman on the team. Maybe if there was, my experience might have been better. We need more women in startup teams to not only enrich the startup culture but also to mentor other women who want to join the community. The lack of women and the lack of visibility deters and discourages a diverse startup community.

Startups in Japan are led by an overwhelming majority of men. 83% of startups in Japan are led by men, and most venture capitalists are men as well. The playing field in accessing venture capital is largely led by men: startup competitions that are key to securing investors are made up of a disproportionate amount of men. The gender gap in the startup community is not only discouraging to budding female startup entrepreneurs but also women systematically lack the funds and resources that their male counterparts have. Less than 3 percent of venture capital funded companies have female CEOs. One of the biggest challenges that women entrepreneurs face is lack of investor confidence; male investors are more likely to invest in male entrepreneurs. Dana Kanze, an entrepreneur, noticed that she was getting asked “prevention” questions much more often than “promotion” questions by investors during pitches. She tested her hypothesis that women who were asked more “prevention” questions would have less funding than men who were asked more “promotion,” questions at a funding competition. 67% of male entrepreneurs were asked promotion questions, while 66% of female entrepreneurs were asked prevention-focused questions. Women must overcome social expectations and limited networks besides systematic setbacks. The startup game is skewed towards men; and women’s participation should not only be encouraged but also the startup ecosystem must change to give women a fair playing chance.